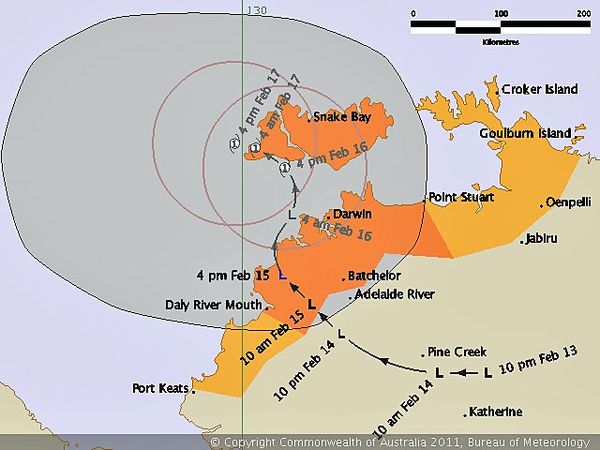 Image: User submitted. Source: Audience submitted
Cyclone Carlos is continuing to dump record levels of rain as the category one system batters Darwin and the Top End. More than 400 millimetres of rain fell on the city overnight, forcing the evacuation of houses, and emergency services are using sandbags to protect more houses that face flooding when the tide peaks tonight. School has been cancelled for today and tomorrow and Darwin Airport remains closed after the Bureau of Meteorology declared a cyclone warning for coastal areas from Daly River Mouth to Goulburn Island, including Darwin, Croker Island and the Tiwi Islands. At least one house was destroyed overnight by a fallen tree and up to 30 were inundated by floodwaters. An ambulance transporting a patient to Royal Darwin Hospital was crushed by a tree, but there were no serious injuries. Emergency services crews received more than 2,000 calls for help overnight, including reports of 91 trees and 31 powerlines down and several cars abandoned in rising water. A 52-year-old man had to be rescued last night after his car became stranded in the fast-flowing Berry Springs. A pedestrian clinging to traffic lights also had to be rescued from the swollen Rapid Creek overnight. In the Darwin suburb of Marrara, a record 435 millimetres of rain fell in 24 hours. There are serious concerns about storm surge in the Rapid Creek, Millner and Nightcliff areas, with a high tide of 6.6 metres expected at 5.40pm CST, Northern Territory Police said. Storm surge shelters at Casuarina Senior College and Nightcliff Middle School are now open to residents affected by flooding. The Territory's Counter Disaster Council says there is no need for cyclone shelters to open tonight, and it is confident people will be safe in their own homes. The council will reassess its position tomorrow morning. A cyclone watch continues for coastal areas from Port Keats to Daly River Mouth. Tropical Cyclone Carlos is currently listed as a category 1 cyclone. At 12:30 am CST Tropical Cyclone Carlos was 15 kilometres south-east of Darwin and 125 kilometres south south-east of Snake Bay and moving northeast at 5 kilometres per hour. Gales with gusts to 100 kilometres per hour are currently being experienced on the coast between Darwin and Point Stuart. Gales with gusts to 120 kilometres per hour are expected to develop over the southern Tiwi Islands tonight, and may extend further south to Daly River Mouth during Thursday and as far as Port Keats on Friday. Gales may also develop between Point Stuart and Goulburn Island, including Croker Island tonight, if the cyclone takes a more easterly track. The bureau says residents in those areas make final preparations to their homes and identify which public shelter to use if they are opened. Residents are asked not to go to public shelters until they are told to do so. Police are urging people to stay off the roads today. As of 3pm CST, several roads were experiencing flooding and had become impassable, including Ross Smith Avenue, Parap Road, Rapid Creek Road, Kimmorley Bridge on McMillans Road, Gunn Point Road, Charles Eaton Drive, Bagot Road near Nemarluk. The Director of Emergency Services Peter Davies says many people got stuck in rising flood waters last night. "Trees on houses, trees across roads, obviously there are a lot of powerlines down, there's been a couple of incidents of people trying to cross creeks and got stranded, so we've had to have people out overnight assisting them," he said. Many homes around Rapid Creek in Darwin's northern suburbs were inundated. With the power out, Millner resident Jade Appleton was not aware how quickly the creek was rising. She was forced to leave her home with her toddler and husband at about 10:00pm. "I knew the river was rising ... [grabbed a] few essentials and got out while we could with the car." Millner resident Terry Lawler says he watched cars get flooded by rapidly rising water on his street last night. He says he also had to use a chainsaw to free his 75-year-old neighbour trapped in her home by a fallen tree this morning. "My neighbour and I went up and we spent about an hour and a half up there removing the tree off her gate and out of her driveway and it was very dangerous actually. There was a number of trees that could have fallen on to her." He says another neighbour lost four puppies as the street flooded overnight. Police on the Tiwi Islands say the community of Nguiu was buffeted by winds of up to 140 kph last night. Acting Brevet Sergeant Chris Bibby says damage has been minimal. "The community has held up pretty well at the moment. "We have a few trees down and some power line issues but our essential services are onto that and structurally there doesn't appear to be any damage to any structures at this stage." Tides will be higher than normal between Cape Hotham and Darwin during Thursday. Large waves may produce minor flooding of low-lying coastal areas.