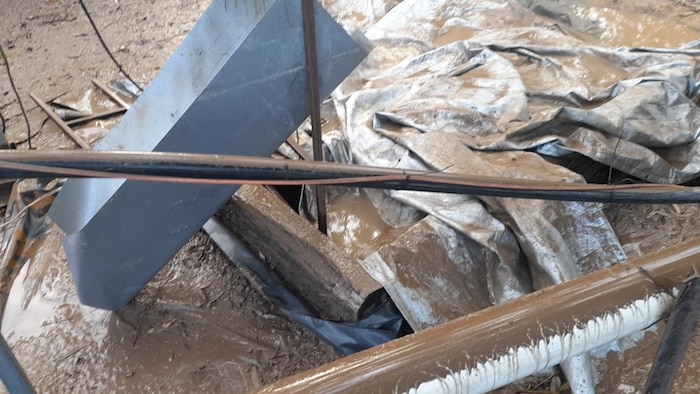 Source: ABC
For the second time in eight months, Clive Nesbitt has lost everything.  Several emergency alerts for flash flooding were issued at The Gemfields in Queensland's Central Highlands between 8pm and midnight last night.  In the past 48 hours, an average of 150 millimetres fell throughout the catchment, but falls of up to 270mm were recorded near Theresa Creek.  Some residents in Rubyvale and Sapphire evacuated before alerts were issued, but Mr Nesbitt only managed to flee his place as it was inundated.  The 67-year-old was rescued from his roof during flash flooding in March.  "He lost everything," his brother Jim Nesbitt said.  "Beds, fridges, washing machines, he lost all his personal belongings, he lost his clothing, he lost pictures of his family, he lost money, he lost his car.  "It has taken him pretty much up until now to get his life back on track again, and the same thing has happened."  Mr Nesbitt said his brother was "on a knife edge" every time it rained.  "He's not really doing that well, I actually had to talk to his friend because Clive was too upset to talk to me," he said.  "He's been through this before, mentally he's battered. "He's a single person, he has health issues and this is like a breaking point." Sirens 'too late'  In March, a $300,000 early warning system for flood and fire emergencies at Sapphire and Graves Hill did not activate.  Mr Nesbitt said this time the alarm did sound, but criticised the timing. "It did go off, it went off half an hour later and it was much too late," he said.  "Everything was completely gone by then." Glenn Bell, the Central Highlands Regional Council coordinator for disaster management, said no evacuation centre was set up because residents evacuated to friends. "All of the residents that would have been affected were door knocked by the police early, and we also put out emergency alerts," he said.  Emergency alerts 'worked well' Mr Bell said the system was activated around midnight and ran for an hour. "We actually activated the sirens they worked very, very well," he said.  "Those that were at threat, and certainly [Clive] had been pre-warned on that, the sirens were sent at a trigger where it actually breaks out of the banks.  "There are a couple of other residences that are lower than that, they had already been pre-warned on the issue and pre-evacuated.  "By the time the sirens went off, certain areas were inundated but they'd already had pre-warning." Mr Bell said an emergency alert was issued two and a half hours prior to the sirens and police were door knocking.  "It's one of the many tools we use," he said.  Clean up ahead  About 30 roads remained closed with more expected to shut as the water flows through the catchment area. Mr Bell said crews would be out doing damage assessments today, and no flood water rescues were required overnight.  "[We're] looking at damage assessments for the infrastructure and the Gemfields area to see what has actually been damaged and affected and what the processes are moving forward into the recovery," he said.  "At this stage looking at the weather, and the predicted rainfall coming in the next two weeks, we're expecting more. "We will continue to monitor each of these catchment areas and continue to provide advice on community safety issues as required." Pat Vine runs a gem shop in Rubyvale. "They're just cleaning up with water damage, the low lying areas by the creek, the (mining) claims have gone again," she said. "It's been over the bridge at Sapphire. "All the dams are full and everything so people are just moving things and mopping up water."