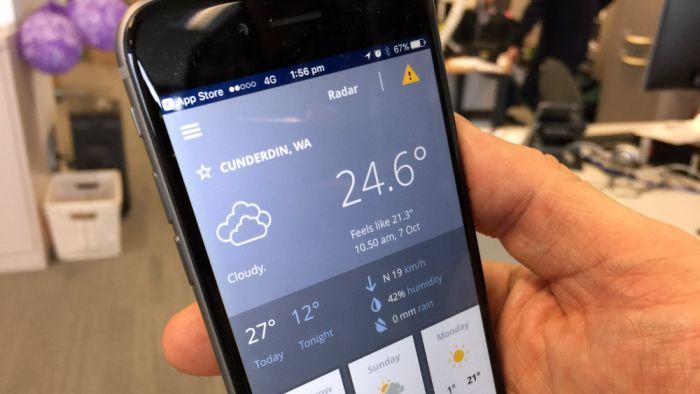 Image: ABC Rural. Source: ABC
The Bureau of Meteorology (BOM) has released a new weather app for smartphones, designed to keep up with the growing number of Australians accessing information on their smartphones. Launched at the bureau's Melbourne headquarters on Friday, the app will simplify the information users can already get at BOM's smartphone-enabled website. The BOM Weather app, which is available for Apple and Android users, is free to download, and gives users a brief look at the weather in their chosen location, with more detail provided at the tap of a finger. It uses BOM's three-hourly forecasts to provide an hour-by-hour snapshot of the coming temperature and expected rainfall throughout the day. An icon also takes users to the latest BOM-issued weather warnings. While the app is free of advertising, BOM deputy director Rob Webb did not rule out having ads in future versions. BOM , after the 2012-13 federal budget. "One of the keys for us with this app is usability. There is no point putting out an app if it's too cluttered," Mr Webb said. "So if there is advertising there in the future, it won't detract from the key weather service." There are already about 100 existing Australian weather apps available through Apple's iTunes store, many of which use BOM data. "This app will have the latest bureau information," Mr Webb said. "Our forecasters are typing and issuing warnings that will appear immediately on our app." Costing about $200,000 to develop and test, Mr Webb was confident users would see the value in choosing the BOM app over others in app stores.