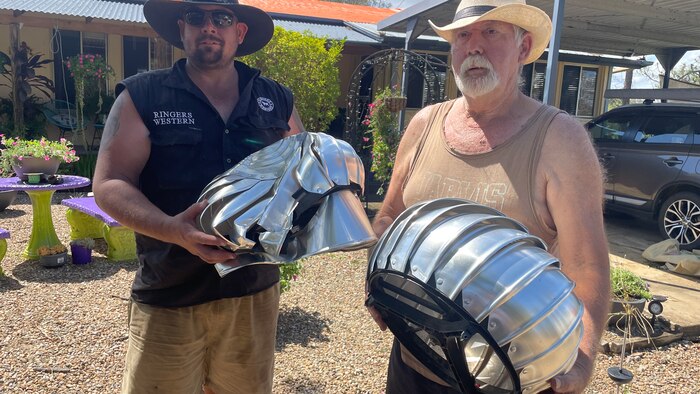 Source: ABC
A small community west of Bundaberg is cleaning up after a "ferocious" storm that locals say caused more destruction than a tornado that hit the area in 1992. Bucca local Geoffrey Peace was woken by the storm around 11pm Monday to find his property already damaged. "We no sooner got into the hallway, and the water was gushing into the windows that much that we had to get the towels," he said. "We used up all the towels first then got through all the bedroom linen; then the hail started and then there was wind ? that was the worst I'd seen." In the morning when Mr Peace went to further inspect the damage, he realised the roof of his back porch had carried 100 metres across the road. "The back [porch] is all gone, we've lost the roof of the shed down there, we've lost half the chook pen. "It's ripped off the whirlybirds ? all the water has come in through there, so we've covered that up and it's blown the top off the chimney so we've covered all that." Residents say it was a tornado The town remains without power, as the Bureau of Meteorology investigates if a tornado did cause the destruction.  It says it is difficult to confirm a tornado when they strike at night. Mr Peace said while he had seen a number of storms in the area, he had never experienced such damaging winds, leaving him reason to believe a tornado swept through the town. "I estimate the wind to be between 90 and 100 kilometres per hour it was going that fast. I couldn't open the door at the back." Melanie Pape has lived in Bucca her whole life and witnessed the 1992 tornado. "For 50-odd years, I've never seen it this bad before," she said. "The one back in 1992 wasn't as bad as this one. This one is a lot worse, a lot more damage." Long-term resident Troy Flemming said the trees across his property were snapped in half. "A very big mess and a big clean-up; it wasn't real nice," he said. "The way the tops of the trees were twisted off, yeah, I reckon it was a tornado." Macadamia trees smashed Jon Brennan, who manages a macadamia farm near Bundaberg, said the damage to trees would have a major impact on next year's profits. "It was like a cyclone ? it blew so much wind and rain. "We had 144 millimetres of rain here in 45 minutes, it ripped everything off the trees. "This morning we had a lot of erosion, a lot of down branches and seven trees ripped out of the ground completely. "I estimate about 30 per cent of the nut is gone off the trees; it's a pretty big impact." Community spirit on display Ergon Energy and Bundaberg Regional Council are assisting with the clean-up, but community members have been quick to answer each other's call. Mr Peace said he sat by the street from 1am after a large pine tree fell across the road. "I said to my wife, 'If I don't sit out there with the damage here, I'd never sleep at night if a car comes in at a fair speed'." Ms Pape said she began clearing debris off the roads at dawn. "It'll take a couple of weeks to clean up, but a lot of people will get in and help. It's a good community, we all get in and help each other."