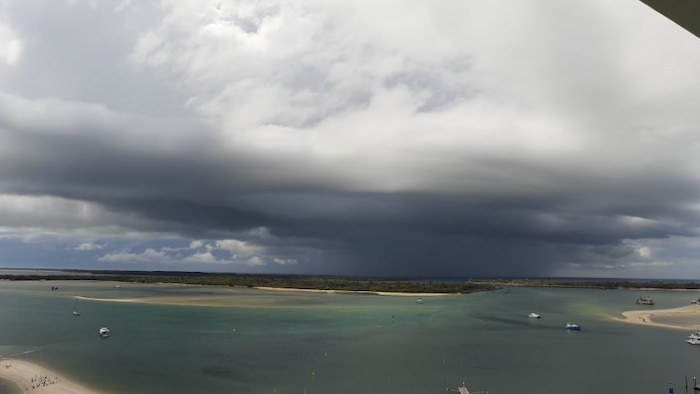 Source: ABC
A tornado hit near Brisbane Airport on Friday morning as a supercell storm event moved across the area, bringing intense rain and strong winds, the Bureau of Meteorology (BOM) has confirmed. The BOM said the storm was moving very slowly eastwards but cancelled the warning when the system passed into Moreton Bay. The BOM took about an hour to investigate, eventually confirming "a tornado occurred during a supercell thunderstorm near Brisbane Airport". The Brisbane Airport Corporation said flight delays were expected and they were assessing damage, but there have been no reports of injuries. The BOM said 101 millimetres of rain was recorded at the airport in an hour on Friday morning. The storm caused a number of flight delays. Brisbane Airport spokesperson Rachel Bronish said the airport was working to assess and "rectify" any damage from the tornado. "We haven't had any reports of injuries which is fantastic news," she said. "But as you can imagine, there's been reports of water leaks and trees down and debris across the precinct." She said the airport remained open throughout the tornado, but operations were "momentarily" suspended and flights were grounded. "Aircraft services were suspended for a short amount of time until the storm itself passed," she said. "If anybody is due to fly out from Brisbane Airport later [Friday] afternoon, we just encourage you to check in with your airline ? just plan ahead and contact your airline," Ms Bronish said. The Brisbane Airport website said five flights had been cancelled. Just before 1:00pm, the BOM issued a fresh warning for a "very dangerous" thunderstorm warning impacting parts of the Gold Coast and Redland City. The storm was moving north-east over the waters east of South Stradbroke Island. That warning has since been cancelled. At 4:20pm, the BOM warned of three "very dangerous" storm cells ? at Gympie, Jimna and a third south of the Queensland border moving north toward the Scenic Rim. By 6:00pm, the storms were no longer considered dangerous. More showers and storms to come The inland low pressure system that has been causing showers over the past week will remain until tomorrow. Earlier on Friday, Senior forecaster Rod Dickson said some Brisbane suburbs received between 60 and 70 millimetres of rain in storms on Thursday. "We'll see further shower and thunderstorm activity persisting into Saturday as that trough deepens, a little bit further inland," he said. "[There is] potential for some damaging winds, heavy rainfall and hail with those thunderstorms, particularly during the afternoon on Saturday." Severe storms once again made landfall in south-east Queensland on Thursday, with multiple reports of heavy rain and hail across the region. The BOM said one storm cell south of Caboolture and Redcliffe had golf ball-sized hail and 78mm of rain, with "much of that falling in an hour". The BOM said Waterford, south of Brisbane, had received 63mm of rain in one hour. Smaller hail fell as part of another storm cell in the Logan region, south of Brisbane, that brought 60mm of rain. 'Pretty warm' temperatures after stormy weekend Over the past few days, hail has been a regular phenomenon across the state. On Tuesday Bloomsbury and Yalboroo, north of Mackay, received 16 centimetre hail, which the BOM said were of a "world record-breaking" size. Mr Dickson said a chance of hail remained throughout the day, but it would not be as severe as it had been in recent days. "For today the biggest risk of hail is about the south-east quarter of the state and around the south-east coast," he said. With thunderstorms and heavy rain forecast, there was a risk of localised flash flooding, but riverine flooding was not expected. Mr Dickson said warm weather would return after the storms. "Things will start to ease off on Sunday as that trough pushes offshore but as it does so, it's going to bring some pretty, pretty warm temperatures to the south-east with temperatures reaching the mid-30s," he said. But what has been quite a wet spring so far looks set to continue with thunderstorms and shower activity expected to return early next week. "[It'll go] back to more normal conditions early next week," Mr Dickson said. "But with a trough in the vicinity we're still going to see some shower and thunderstorm activity around the early part of next week as well, but unlikely to be as severe as we'll see over the weekend."