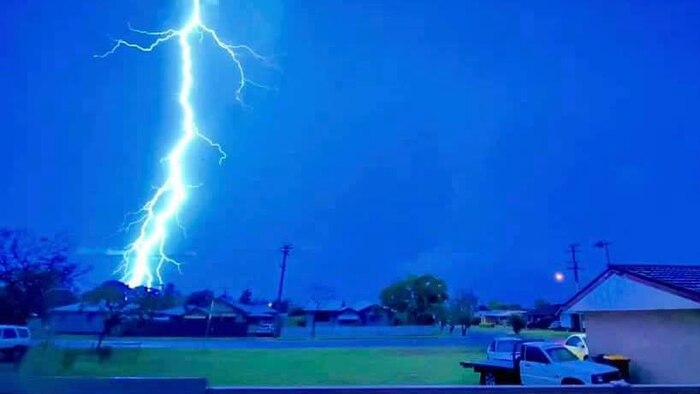 Source: ABC
A severe overnight storm has taken out power to almost 800 homes in the Bundaberg region with authorities saying it could take all day for crews to restore services. "It was quite a ferocious storm really that woke lots of people up and brought lots of rainfall in a very short space of time," Bureau of Meteorology (BOM) meteorologist Helen Reid said. She said since 9:00pm yesterday some regions west of Bundaberg had between 50 and 80 millimetres of rain. Ms Reid said most of that rain would have fallen within half an hour. "We are aware that there would be some damage that would be sustained from that storm going through," Ms Reid said. Ergon Energy's Justin Coomber said the storm generated almost 250,000 lightning strikes. "There were very active storm cells and about a dozen powerlines are still down," he said on Wednesday morning. "We're finding widespread damage with lots of trees down and they're blocking roads." 'Organised' storms Ms Reid said a "very humid environment combined with a surface trough" would have led to the thunderstorm development. "Throughout the depths of the atmosphere we have had an ability for thunderstorms to be supported as they grow and they can also be very tall and long lived," she said. "There has also been just enough movement for these storms to be what we would call 'organised'. "They have been able to develop into severe storms and sometimes in recent days 'supercells'. "All that adds to the longevity of a storm, which means there is more water involved, lots of reports of hail, wind gusts and in previous occasions we have had tornadoes reported." Ms Reid said tornados were not something the BOM saw often, but with more and more people armed with camera phones they were seeing more images of them in action. She said the state could expect a "respite'" from storm activity this week but they could be back on the weekend as a trough moves across the state.