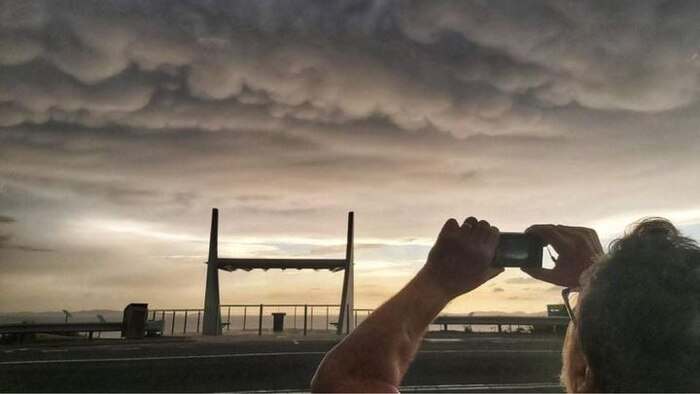 Source: ABC
Two tornadoes have been observed as severe thunderstorms with large hail and heavy rain moved across large parts of Queensland. The Bureau of Meteorology (BOM) confirmed a tornado at Pittsworth south-west of Toowoomba, and was investigating another one observed at Bracewell near Gladstone. The bureau cancelled its severe thunderstorm warning at 5:30pm across the state's south-east, saying the weather system had moved offshore, leaving land areas with rainfall below severe thresholds. Earlier this afternoon, thunderstorms with heavy rainfall swept across south-east Queensland, with 80mm of rain recorded in an hour at Molendinar on the Gold Coast. Further north, another thunderstorm warning was cancelled earlier this afternoon for the Capricornia, Wide Bay and Burnett, Central Coast and Whitsundays, Central Highlands and Coalfields regions, and further inland in the Darling Downs and Granite Belt areas. Tornado activity The BOM confirmed this afternoon there was a tornado south-west of Toowoomba near Pittsworth, reported just before 11:00am. It was also investigating reports from residents of a tornado at Bracewell, west of Gladstone, this morning. Heather Cuzens has lived in her Bracewell property, near Gladstone, for four years and said she has never seen a storm formation like the one she saw this morning. "We get some really good thunderstorms here in the summertime [but] I have not seen anything like that," she said. "I was shocked." 'Clouds swirling really fast' Ms Cuzens said she went outside to check for hail. "I just happened to look up and cross the paddocks and I just saw this tornado spinning," she said. Ms Cuzens said she "got it more in the last minute" before the formation tampered off. "It wasn't moving quickly or anything like that ? and then it just went back up into the sky again." While the formation was not moving, Ms Cuzens said "the clouds [were] swirling really fast". Senior forecaster Shane Kennedy said the BOM had assessed footage and was continuing to investigate. "[We] have seen some photos and video footage of that [report from Pittsworth], which does seem to confirm a tornado there," he said. "I imagine we'll get some more footage and some people looking at the impacts on the ground as well." The BOM said there had also been reports of golf ball-sized hail near Mount Larcom in central Queensland this morning. The BOM said 51 millimetres of rainfall had been recorded in 30 minutes this morning at Centenary Bridge in the Darling Downs. A combination of above average temperatures, dry air and fresh west-to-southwesterly winds are producing severe fire danger conditions across the Central Highlands and Coalfields district. BOM forecaster Shane Kennedy said earlier on Monday that damaging winds, large hailstones and heavy rainfall, which could lead to flash flooding, was possible throughout Tuesday, with the most severe cells expected this afternoon. "We're quite likely to see a fair amount of rainfall today so looking at the 20-40 millimetres range across most of the [impacted] area," Mr Kennedy said. "Most of the danger is expected to be to the north-west, roughly north-west of Kingaroy and we've already got a storm warning out for the Rockhampton area. "We'll likely see those showers and storms continuing overnight and into tomorrow." The BOM said the severe storm activity was caused by a warm and humid airmass residing over south-eastern districts, combined with an upper trough. Heatwave conditions are developing in the Gulf and surrounds this week and will peak on Wednesday. The BOM expects the "unsettled" storm activity to hang around until at least Thursday. "Pretty unsettled this week, really unstable, [it will] hang around for Wednesday and Thursday at this stage ? but it could certainly still be a little bit wet for the next several days, at least," Mr Kennedy said. A fire warning was also issued for the Central Highlands and Coalfields District on Monday. The BOM said "above average temperatures, dry air, and fresh west-to-south-westerly winds" had created a "very high fire danger" for the central and northern districts.