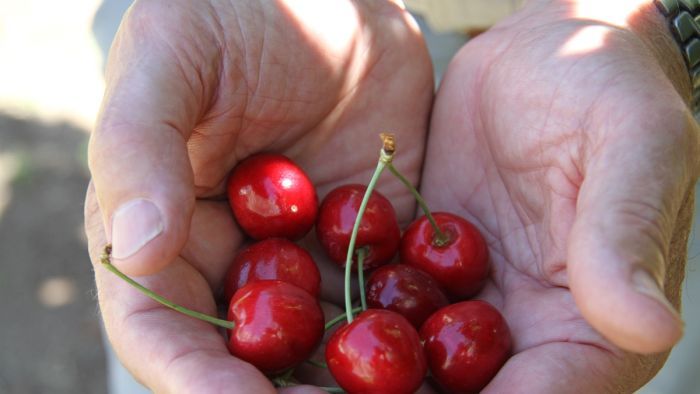 Source: ABC
Cherries from farms in Tasmania, Victoria, New South Wales and South Australia will be the "most expensive ever grown in history", says the president of the Cherry Growers Association of Australia. Farmers on the eastern seaboard have been hit hard by continued rain, unseasonably cold weather and low pollination spread which has reduced the annual harvest to just 40 per cent of the previous year. The low yield has forced supermarkets to maintain the high price for cherries. Tom Eastlake, president of the Cherry Growers Association of Australia, said the situation was "unprecedented". "Everyone just got smashed," Mr Eastlake said. "We are about three weeks to a month behind schedule in some places and little to no yield. "Nothing like this has ever happened before across every production region in [eastern] Australia." Mr Eastlake said growers were doubly stung by a typical outlay of costly fertilising and fungicide programs which had been applied prior to the dramatic weather events. "This will be the most expensive crop per cherry grown in history," Mr Eastlake said. "Unfortunately when you've already committed to your full fertilising, fungicide, pruning and labour program and you then find out you don't have any yield? "It's going to be a tough year." A spokesperson from Coles said the "unseasonably cold growing season" had led to "an industry-wide shortage of cherries". "We are working with our cherry growers to minimise any impacts to offer our customers delicious cherries this season," the spokesperson said. Mr Eastlake said the one positive was the quality of the fruit that had made it through the season. "It's the best it's ever been," he said. WA cherry farmers worry about forecasted weather Meanwhile, Western Australia's cherry farmers are hoping a late blast of cold weather in the lead up to Christmas will not play havoc with their otherwise stellar â€” if slightly delayed â€” growing season. Most growers in WA's south west reported good crops of early season cherries, fetching a premium price of $20 per kilogram in major supermarket chains. Western Australia's growers are on track to harvest their average of 4,000 tonne per year. And while all are content with the quality of their fruit and price it is fetching in supermarkets, seasoned farmers recalled many lean years prior to this one. "We've gone down to as low as $6 a kilo which starts to make the whole thing marginal in terms of the viability of growing cherries," Manjimup cherry farmer Harvey Giblett said. "So with the amount of work and the crop load you get, you really need to start between $12-15 a kilo to really make it a commodity worth growing profitably." Other growers in the south-west town agree, but are wary of a forecasted period of heavy rain which could spell trouble for the abundant fruit still of cherry trees across the region. Fellow Manjimup grower Maria Vellios said growing conditions "could not have been better". "It's been an exceptional season, if a little behind schedule," Ms Vellios said. "But everyone's had good crops with fantastic cherry set. "But nobody's looking forward to the weather that's on the way. "There's predictions for some heavy showers, which this late in the season could cause a lot of issues with the fruit left on the trees. "We're all just hoping it'll blow away and go somewhere where it's needed." The rural town of Manjimup recently held its annual Cherry Harmony Festival and Mr Giblett said he sold his entire stock of 2.5 tonnes to the thousands of visitors who streamed through the two-day event. He said he expected to remain up to $20 per kilo in major supermarkets in the lead up to Christmas, but that it would "test" WA's supply of cherries given the low volume coming into the state from the east. "It's going to tighten up supply here in WA, so the demand's going to be quite strong and with strong demand, prices obviously go up accordingly," Mr Giblett said. "So if you've got really high quality fruit, it's probably not unreasonable for growers to get $15, $16 or $18 a kilo."
Note to media: You are welcome to republish text from the above news article as direct quotes from Weatherzone. When doing so, please reference www.weatherzone.com.au in the credit.