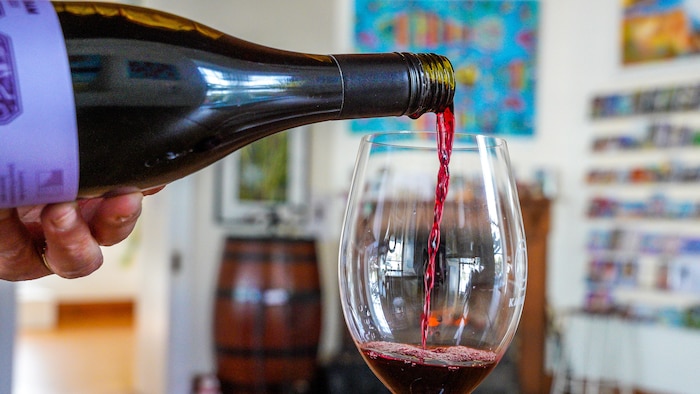 Source: ABC
The latest climate report released by the United Nations is considered 'code red' for humanity, but what does a warming world mean for your glass of red? While your favourite wine label will probably remain on the shelf, what is inside the bottle is changing. Mike Hayes has been producing award-winning cool-climate wines in southern Queensland's Granite Belt region for decades. "What I've noticed here, and probably in the past 20 years, is that the night-time temperatures are getting higher." Mr Hayes is considered as a champion of sustainable viticulture in the industry and has been researching the impact of the warming world since 1980. He says grapes are a goldilocks fruit: if you want good wine, temperatures can't be too hot or too cold. "You won't be drinking Champagne from Pinot Noir and Chardonnay in 25 years' time. "You might be drinking ? Tasmanian sparkling wines but definitely not from the French." Mapping for the future In 2015 the industry's peak body, Wine Australia, commissioned a report from the Climate Futures Research Group at the University of Tasmania. Australia's Wine Future: A Climate Atlas was published two years later. Climate Futures Programme director Rebecca Harris says the atlas confirmed on-the-ground reports by growers: hotter and drier climates, shorter ripening times and more extreme weather events. "People can look at things like the number of days per year they can expect to exceed temperature thresholds like 25, 30 and 35 degrees [Celsius]." "That's really quite astonishing when you look at how many days per year those thresholds are going to be exceeded." The atlas predicts how wine-growing regions around the country will change over the next 80 years  by forecasting temperature, rainfall and outdoor working conditions. "One of the wine makers that I spoke to said it was an epiphany. "She had been expecting and assuming she would be passing her vineyard on to her son." Dr Liz Waters, general manager of research, development and adoption at Wine Australia, says the industry has been planning ahead for decades and the climate atlas is just one piece of the puzzle. "It's a really important resource because it prepares us for the future." Southward bound Kate Hill lives in Tasmania's Huon Valley and owns one of the southern-most vineyards in the country. Originally from Victoria, Ms Hill travelled the world making wine and says she saw the writing on the wall about 15 years ago. "People talk about harvest dates already being a couple of weeks ahead of where they were 10 to 15 years ago, and we're seeing a lot of young wine makers moving to Tasmania for that reason."  As a result, rows of shiraz grace Tasmanian hillsides, a grape commonly associated with the shimmering slopes of South Australia. "We believe if we get some warm years the Shiraz will perform really well." Sheralee Davies, CEO of trade group Wine Tasmania, says Tasmania is attracting big business from players such as Brown Brothers. "We certainly provide an alternative location for areas that are going to be negatively affected by a changing climate," Ms Davies says. "Brown Brothers talked very much about the motivation [for the move] being the changing climate and the need to diversify vineyard sites." Can the Apple Isle really save the grapes? Tasmania's cool climate is no silver bullet. Ms Davies says the state focuses on quality, not quantity, and the island is limited by its size. "It is never going to be a situation where the entire interstate wine growing areas ? basically move to Tasmania."  Grüner veltliner, blaufränkisch, gamay, gewürztraminer. You probably haven't heard of these varieties before ? unless you're a sommelier or fluent in German ? but Ms Davies says this is what is heading for a bottle shop near you. "I think that's where the excitement and the innovation is occurring at the moment and is likely to continue."  Worse than the worst-case scenario As emissions continue to rise the predictions made in the climate atlas seem increasingly conservative. "We only modelled [emission scenario] RCP 8.5, which at the time was considered a worst-case scenario [for the concentration of carbon]," Dr Harris says. "We are tracking above it at the moment. "If we get our acts together in Glasgow next month and the international community really aims to mitigate and reduce our emissions, then we have a chance of getting below RCP 8.5 and that's what everyone is hoping."