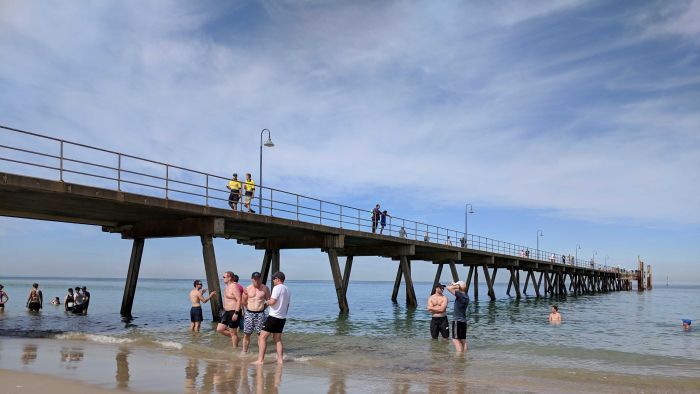 Source: ABC licensed
Temperatures have soared above 40 degrees Celsius throughout Australia as extreme weather hits parts of South Australia, Western Australia, New South Wales, Victoria, the Northern Territory and the ACT. The mercury reached a record 49.3C in Marble Bar in Western Australia's Pilbara region shortly after noon â€” the hottest day in the town since temperature records began in 1901. In South Australia's mid north region, Port Augusta and Whyalla each hit 46.8C. Capital cities swelter Alice Springs reached 44C, Adelaide hit 43.7C and Canberra, which was forecast to hit 37C, reached 36C. South Australian Bureau of Meteorology (BOM) forecaster Bonnie Haselgrove said that in the north-east corner of the state, forecast maximums were expected to remain in the 40s for the next week. "So there is heatwave conditions going in that part of the state," Ms Haselgrove said. "They extend right through northern Victoria and into New South Wales. "Heat and the winds has led to those conditions." An extreme fire danger warning has been issued for the Mount Lofty Ranges and a severe warning has been declared in nine other districts. this December. At Melbourne Airport, the mercury hit 39.8C, while 36.6C was recorded at Melbourne's Olympic Park. Northern Victorian towns of Mildura and Swan Hill both reached 43C. Victorian BOM senior forecaster Rod Dixon said the region was set to swelter before a cool change on Saturday night. "We may well break some records across northern Victoria in terms of consecutive days across 40C for this heatwave, so it is certainly a noteworthy event," Mr Dixon said. In Sydney, where a top of 32.4C was recorded at Sydney's Olympic Park, crowds flocked to Bondi Beach to escape the heat. Lifeguard Bruce Hopkins said the cool sea breeze was a big drawcard. "We've got a nice north-easterly breeze blowing and it's a bit cooler than what it would be out west," he said. Surfer Anil Piano agreed. "Right now, it's actually quite nice, because there's a breeze coming out, but when you go out there (away from the beach) it's really hot," he said.. On the other side of the country, at Marble Bar in Western Australia's Pilbara, locals sweltered through a scorching 49.1C, on a day when a key town facility is closed. Cheryl Manurung from the Iron Clad hotel told ABC Radio Perth that "the local pub is shut for the day". "We breed 'em tough in the Pilbara ... don't even know that it's hot until somebody comes along and says 'it's really hot today'," Ms Manurung said. "It's a dry heat and it's good." The local swimming pool, however, is open but providing somewhat limited relief. "The temperature is 29 in the pool," Ms Manurung said. Hot weather to continue to New Year's Eve From Thursday until Saturday, the BOM is expecting severe to extreme heatwave conditions to continue to expand across South Australia, south-east New South Wales and into eastern Victoria. Extreme heatwave conditions will be experienced south of Broken Hill to Sydney down to north-east Victoria. North-east Tasmania will also be under a severe heatwave. Over the weekend, severe temperatures will reach western Sydney, with temperatures forecast for 41C in Penrith. The BOM is predicting conditions for New Year's Eve will still be severe, extending from central Australia through most of New South Wales to the coast. Sydney is forecast to reach 32C on Monday. In Victoria, a cool change is forecast to bring milder temperatures, with a maximum of around 25C for Melbourne.